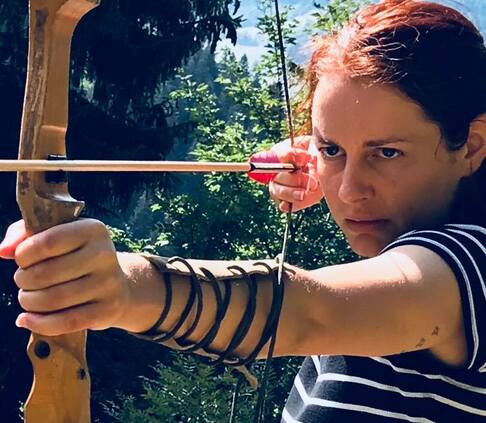 This is a transcript of a response I made on Facebook to a man's comment on a Heart of the Huntress photo. It generated over 200 comments and opened up an incredible discussion. I'll include the link so you can read the comments as well, if you feel to.

I don't know if I will leave this post up. It might be too much, Let's see.

I have a Heart of the Huntress workshop advertised and a man posted a careless comment, about the gorgeous cover photo of Tia shooting a bow. Let me state up front that this isn't a workshop about bow hunting. It is a personal development workshop, a dancing workshop, where we shoot some arrows as a metaphor.
Anyway, this man said a thing. And I couldn't leave it. So I said a lot of things. Some of them may be triggering, because they are about hunting. If this post gets crazy hate responses I will take it down. But I hope it doesn't, because it is a conversation that is in a lot of ways tabu, and I am interested in that which lies at the edges. So let's see where this goes. I'm curious...

The dude says this:
I've seen this kind of image before and I like to support this kind of thing but I gotta say I've got a 60 pound bow which is kinda the minimum that you'd want to hunt with and I've not seen a woman yet that can string it.
I know women can be strong but come on women ya going to have to push a bit harder if you want to be a real huntress.

I say this:
Wow. I almost don't want to engage with this, but I will, because it's the kind of attitude that gives men a bad name and I don't think you want to be one of those guys, do you? I don't believe you are one of those guys.
You say you like to support this kind of thing? What kind of thing is that? The little woman picking up a bow and having a go, bless her dear little socks, when really she should be in the kitchen making you a sandwich, or fetching you a beer? That's how you sound, with that comment. Is that really who you are? I'd like to hope not. I would like to think that you can see past stereotypes. I am prepared to see past the stereotype that you are representing with your flippancy, and ask that you do the same.

Yes, most women couldn't string a 60lb longbow. And if you are the kind of hunter without true stalking skill, who needs to be in a hide, a fair way out, and needs a heavy bow to cover that distance, sure, you have a point. But if you can stalk right up to the animal, if you know how to track and trail, listen and be receptive, and wait for as long as it takes, and get close enough, and your aim is accurate from the thousands of hours of practice you have done so your shot is true, a 40lb to 50lb bow is enough. I am not that good. I will be honest. I do not have that depth of skill. However, I know women who are, who do.

But let's look a bit deeper. In the context of this workshop, huntress doesn't mean killing animals, ever. Ever. Huntress in these workshops means being in harmony with life. Let me be really, really clear. These workshops aren't about killing anything, we don't go out on the landscape and look for animals. There is no hunting of animals at all, ever, in one of these workshops. No mention of it, even. Huntress in this context is an archetype. It is a movement, a dance, an energy of balance. It is an exploration of a story in women, a story of possibility and potential. By exploring this story, transformation can happen, real and embodied. Lives can change. Huntresses in these workshops are hunting themselves. Hunting their own magnificence. Their bigness. Their courage. Their ability to claim their birthright.
The bow we shoot here is a metaphor for power. It is there to give women the feeling of that power and the ability to aim at something that we need, to hunt our needs, to hunt a life that works. These workshops are about the deepest skills and rhythms of the huntress, in relationship with everything around her. They aren't about size, or brute force, they are about skill, the skill of the heart, the skill of the soul, moving towards oneness, stalking our own true natures, tracking our wisening hearts.

You say women need to push a bit harder if they want to be a real huntress? Really? A spider hunts, and it is a tiny creature. A dragonfly hunts. A wolverine hunts. A dolphin hunts. None of these animals push. They listen. They watch, they wait, they are in right relationship. They listen to the deeper rhythms of their bodies and the environment, they read the song of the earth and turn its pages to get their needs met; shelter water fire food. By doing so they survive. This is the Huntress. This is what we are exploring in the workshop. How to have power in the world, and grace, while getting our needs met, in harmony and rightness.

So now let us move on from the context of this photo and your out-of-context comment about it, and put the workshop aside completely. Because you've opened a door to an interesting conversation, and this is the third time this subject has come up for me in the last week, and I'd like to follow the thread. 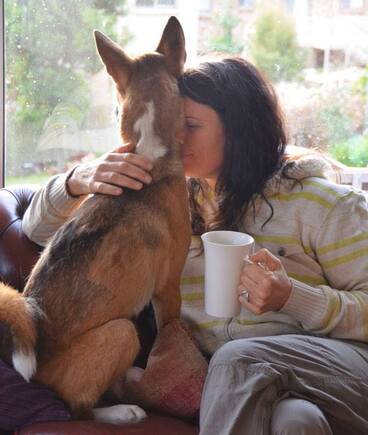 I've hunted many times with only a dingo and a knife, and taken animals that weigh as much as or more than I do, and I am a big, strong woman. I never took an animal when I had a full belly, because that would be disrespectful. I had no meat in the freezer when I hunted. I had actual need. I was hungry and I needed meat. When I hunted like this for meat the dingo would only hunt when I told her she could, not willy nilly. With my permission. I would assess the animal, assess my own need and, if there was rightness in my body, tell her she could go. She would streak away to stop the animal and then call me, and I'd run to her and take the creature in my arms and gentle it, stroking and loving it, telling it how beautiful it was, its fur, its eyes, its ears, its clever body, its strong muscles; thanking it for the gift of its life. I'd do this until its heart rate slowed and it grew calm and relaxed against my body, and it would finally turn to look into my eyes and surrender with a sigh, and I could feel its heart beating against my heart.

I'd stay with it for a long while like this, talking to it, letting it relax more and more, stroking and loving it. I didn't take its life from a distance, where I could harden myself to the gift of its life and the pain of its death; I did it with my knife, my action, my consequence, and I felt it all. Me, my human animal, up close, with the creature in my arms, and my stroke had to be sure and clean and my knife super sharp. I learned this the way you would never want to. Badly. The awfulness of that taught me how to do it skilfully, quick and strong. And then while the creature died I'd hold it to my chest, sobbing with such overpowering grief that I could barely sing the chant that was given to me by a beautiful kahuna Auntie on Oahu, to help sing the animal's spirit home. I held the animal as it left its body, still singing, singing, sobbing that I was sorry, loving and thanking every part of it, and the forest stilled, every time; the birds fell quiet, the wind seemed to hush and there was a vast and overpowering silence that I felt in every cell.

Once the animal's spirit had left its body, I did the messy work, guts for the dog for her probiotics and greens. I took the skin and tanned it later to use the hide to make bags and objects. I harvested all the meat for jerky; wild, beautiful meat to nourish my cells. I took the sinews and bones for tools. I used every part of the animal I could, so nothing was wasted. And then I made a fire by friction or with flint and steel if I wasn't in fire flow that day, and cooked parts of the backstrap, rolling them in hot ash and alternating giving a piece to the dingo with a piece for me, thanking her for the work she did, thanking the animal for its sacrifice, and then covering the fire when we were done so there was no trace of it.

Hunting, for me, is not about killing, and a Huntress is not about a woman being able to string a big bow. It is not about competing with men. There is no competition. There is no need for that. This is about a deepening relationship with the parts of us that do what they need to do to survive, to get our needs met. Huntress is an archetype, a relationship with the parts of myself that I need to meet in order to do the messy work in myself, to take the life of the parts of me that no longer serve me, and to do that gracefully, with awareness and compassion and skill. The Huntress in me uses every part of myself for something greater, so nothing is wasted. The Huntress in me thanks those dying parts for their lessons and sings them home. The Huntress in me has respect for all life, and knows that everything on this planet feeds on something else, and that to be in right relationship we must never take that for granted, must take responsibility for our actions, and be grateful for the gifts of life and death, death and life. It's all the same door. We can never be truly out of relationship, even when we forget, because everything living is connected by one breath.
​
Thank you for your flippant comment. It has made me reach in to explain a thing I hesitate to talk about, mostly. I hope it touches something in you. It has certainly touched something in me.
Gina